With the rockery section almost complete the track led us towards our first bridge.I think bridges add greatly to the enjoyment of the ride and never miss an opportunity to build one. This first bridge was a small affair over a dry gully specially excavated for the purpose (I did say I never miss an opportunity and I'm also not opposed to creating one). As there were bigger and better bridges to come I used this as a chance to experiment with construction methods. I started with an A frame construction with two pieces of angle joined by a substantial cross member. The track it’s self is mounted on two longitudinal sleepers fixed to the top of the A frames. The first problem was when the angle was hammered in to the ground it encountered stones and rocks which threw it off course making the frame difficult to line up. Having reached the correct depth the angle was not particularly solid. On a small bridge like this the short comings were not a great problem but this was not the way to make any larger bridges.
What did look good to me was the longitudinal sleepers, I like the fact that it is not conducive for walking on by full size people and that the bridge looks completely different to the rest of the track. 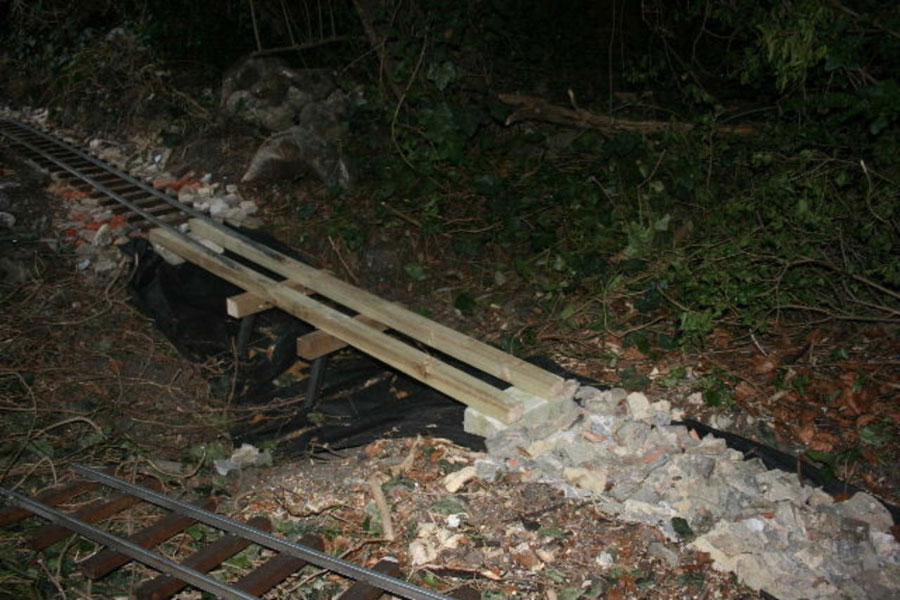 After crossing the bridge we have a short curve round a tree and then on to a longer straight section. This part of the track is laid under a line of large fir trees, the ground under them does not support much undergrowth so track laying was straightforward.
There was a bit of ivy to clear and then the track bed was dug through the leaf litter down to a solid base. The end of this section leads us in to the bottom loop, the gradient here eases as we get to the point. Up to now the line has been completely pointless, this is where the point goes in, if you get my point.

I have tried to avoid cutting established trees and bushes as much as possible, this has meant going round obstacles often on ten foot radius. We have not flinched from doing this even if there are several ten foot reverse curves to be negotiated as at this junction.
The construction of the point is unusual, it is a ten foot radius Y with a snap over change mechanism. Most points are quoted with one line to a particular radius and the other line straight, my one has both lines curved sharply away from each other, both on ten foot radius. This changes the geometry of the point completely, there are only four sleepers between the blade end and the frog, and the frog its self is a much sharper angle. We used a frog from a diamond crossing for this point as the normal ten foot frog would be miles out.
. 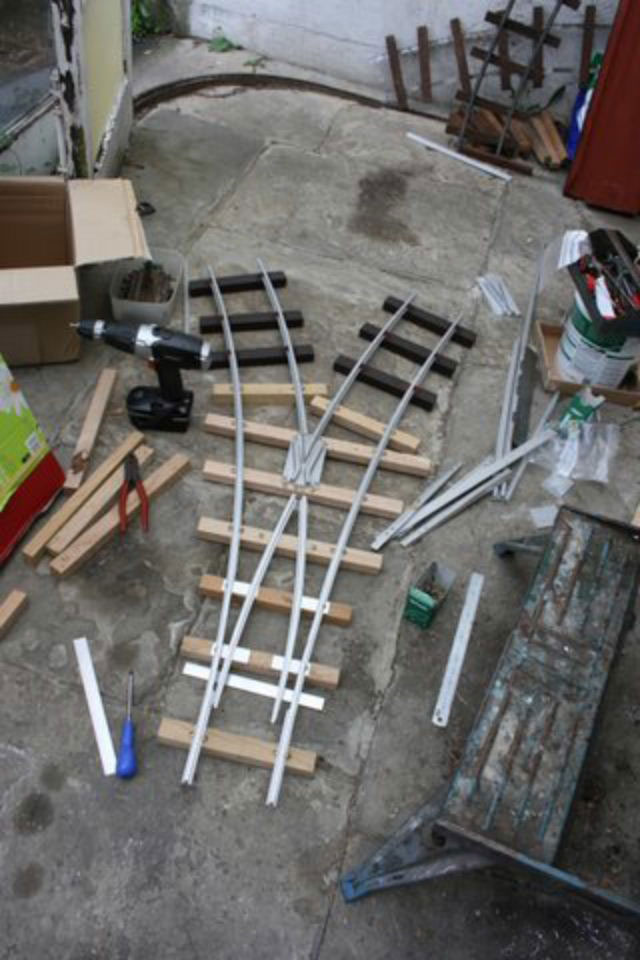 The snap over point change mechanism is used so a train entering the loop can exit over the point setting it to the opposite direction. When the train returns it will go the other way round the loop and set the point back to the first direction when it exits. This means driver and passengers get a completely different view round the loop every time.
As the point blades are short they run right up to the frog without a joint, the whole section needs to move when the point is changed so the screws fixing the blades need to be lose enough to allow this. The spring changeover mechanism does a second job of holding the blades hard up against the frog, without this the blades would not stay in place. The gap between blade and stock rail is kept large to help the spring snap the blades over center as it is changed in each direction. In spite of its unconventional nature this point has been most successful and never given a moments trouble since installation.
It requires a little oil to keep it free, steam oil was tried but proved too thick on cold days resulting in the mechanism not snapping over when pushing light stock back over the point.

I have not been able to enjoy the reversing action of the point controlling the loop yet as the line has to be worked once forward and once backwards until the top loop is completed. Each direction of travel always goes the same way round the loop unless you manually change the point at some time. I may need to alter the change mechanism with a one way spring or lever if the line is to be run with two or more trains, a train waiting in the bottom loop finds its self nose to nose with the incoming train if the point is left to its own devices!

In Cuba on the sugar lines each train has a man on board who’s job is to get off and set the points ahead, this is in addition to the driver, fireman, lines man complete with telephone and any other hangers on wanting a ride. On the garden line it is the driver who has to perform all these functions for himself. There was one memorable Cuban footplate occasion when the entire crew consumed two buckets of beer, handing it round in coke tins with the tops cut off and dipped into the bucket for a refill. This was all very well but the driver, having consumed several tins full, misjudged the siding on our return to the depot and backed into several bogies at the end of the line. On my line the company rules state that all beer should be kept in bottles, not buckets. 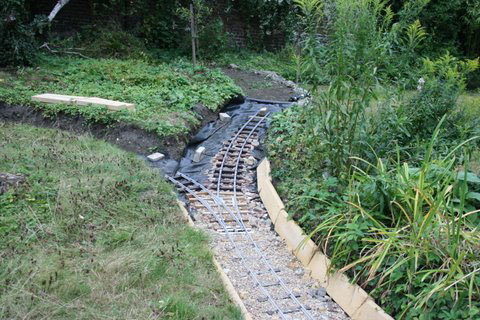 There are no published comments.