The embankment has seen some settling over time, and requires frequent rebalasting. All in all an interesting experiment but the trestle bridge has to be the easier option. The far end of the embankment curved away from the wall to form the bottom loop on about twenty foot radius. This is where this line stopped for a while as the other part of the loop was constructed, the two parts to be joined by the thirty foot long trestle bridge. The prospect from the end of the embankment was a little daunting to say the least with a miniature version of “The big hole at Delabole” to be confronted. This is a large slate quarry in the north of Cornwall, worked since medieval times and said to be the biggest man made hole in England.
During the war my Aunt was stationed at St Merryn airdrome near Padstow, developing and printing reconnaissance photographs taken over enemy territory. Apparently aircraft returning over Delabole had the altimeter “throw a wobbly” as they flew over the big hole, quite disconcerting when you rely so much on this for accurate height readings during clandestine flights.
When the bridge is complete passengers on the train can experience a similar phenomenon in miniature, so long as they are clutching an appropriate instrument. 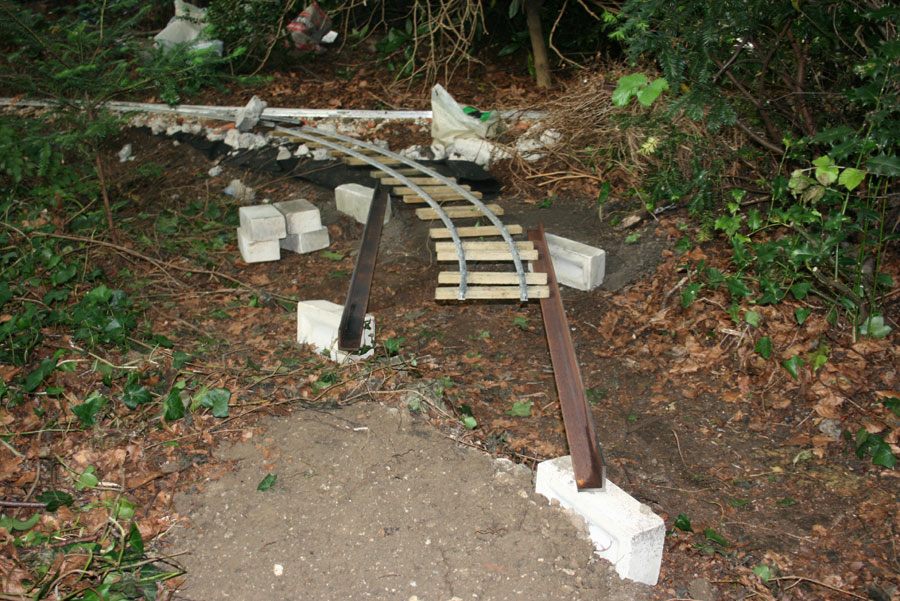 A few years ago I bought a copy of a large scale map of our area from 1860, It shows the house in some detail, even including the garage (which must have contained a one horse power car at that time). The map showed a path round the garden, edged with decorative rocks. A “Time Team” type dig in the undergrowth revealed the path complete with some of its flint edging. The railway line from the pond follows the path but at the loop the line needed to cross the path curving right, then cross it again curving to the left. This part of the path could not be walked as trees had grown too near its edge so it was decided to cross the path on two low bridges skirting the edge of this tree. A diversion path was put in beside the track to avoid walking this section.
The two bridges are only some four inches off the path and represent the type of bridge you might find over a river or canal, they also had both to be on curved sections of track so the first type of bridge was quite unsuitable.


I started with two stout lengths of angle iron, supported on engineering bricks set in the ground on edge. The two pieces of angle were placed facing each other so over size timber sleepers could be placed across to support the rail. The angle was arranged far enough apart to get the curved track in place on the top. Only two of the sleepers needed to be bolted to the angle with long coach blots, one at each end. The rest of the sleepers are trapped between the two pieces of angle and held in place by the rail screwed on top.
The two bridges have been successful, and have not needed any significant attention. Like the other bridges it is the embankments either side that tend to settle while the bridge stands it’s ground so to speak. I have not felt the need to use concrete so far in the construction of the line, I like to think that things can be adjusted at a later date if required. The bridges are a good example of this though in soft ground the bridge supports would benefit from a bit of extra foundation work. 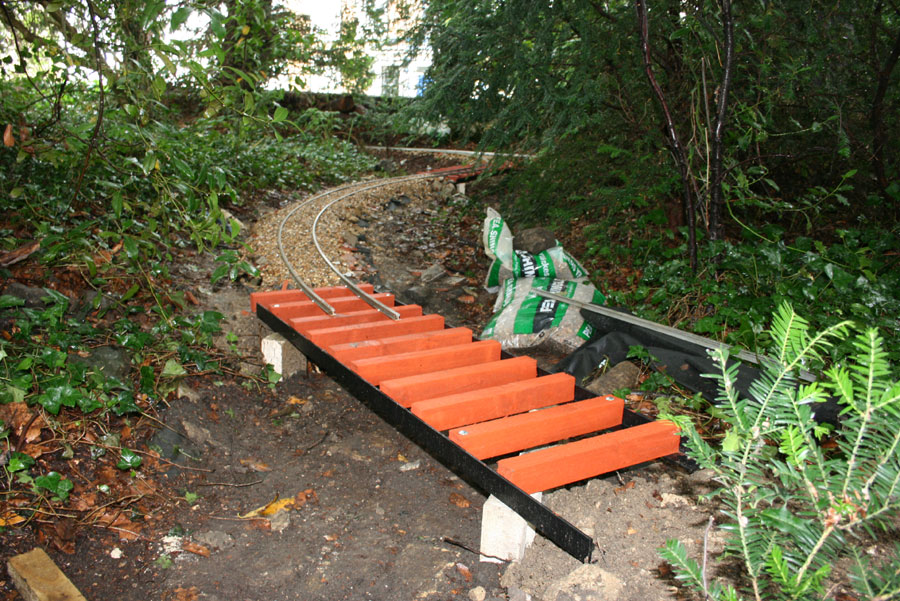 As the track sections were laid they were curved to place over the bridges. At this point I realized that it looked better if the line was laid with curves adjusted by eye rather than to a set radius. If you look at the full size you will see most track meandering through the landscape in a series of gentile curves. It is easy to get in to the “train set” mentality of straight or curved track panels all to a set size, this is not the way full size lines are laid.
To get a less toy like garden railway I would recommend setting the levels carefully but having the curves going the way they want to rather than keeping rigidly to set radius panels. This is only possible so long as you keep over the minimum radius of the line, it is useful to have the odd track panel curved to the minimum radius so it can be tried in place on the track bed to guide marking out. I used several aluminium sleeper track panels on this section of the line, curving them to suit and ending in a small embankment leading to the start of the trestle bridge.

With more bridge building to come, join us week as we tackle the trestle bridge.

Steve Cook07 June, 2018I&#039;m getting some great ideas for our line, sadly still quite a way to go yet! In particular I like the bridge construction as my wife has said we have to have one!

alex P07 June, 2018You need to see the steel bridge construction in the next bit! Wow, it still makes you take in a sharp intake of breath every time to come to it! :)